During the seventies, Hiroyuki Hasegawa, and his partner Mr. Kitagawa decided to start an aftermarket tuning company. Together with a capital infusion from Sigma Automotive Co. they started tuning engines and producing high performance parts. (Hence the name “HKS”). Aside from their popular turbocharger kits, mufflers and high end coilover’s, HKS is also well known for their electronic products like standalone ECU’s turbo timers and electronic boost controllers.

In today’s tuning scene its no secret that performance plus electronics equals more power. Case in point here is this tuned EVO-X that showcases how much additional horses can be attained by simply using electronic products from HKS. More particularly the HKS F-Con V-Pro, which is a stand-alone, fully programmable ECU. While this can be considered as a major mod due to its hefty cost and the fact that it has to be dyno-tuned. Keep in mind that this is still a bolt-on part with no internal mods required. According to HKS, “the HKS F-CON V Pro is a feature-loaded standalone engine management system that connects as easily as a “piggy-back” fuel and timing controller”. While it may sound simple enough, but what it really does is introduce a whole new ignition and fueling map based on the mods made. As such, the engine will be more responsive to throttle inputs and raise torque curves at the bottom to mid-rpm levels. 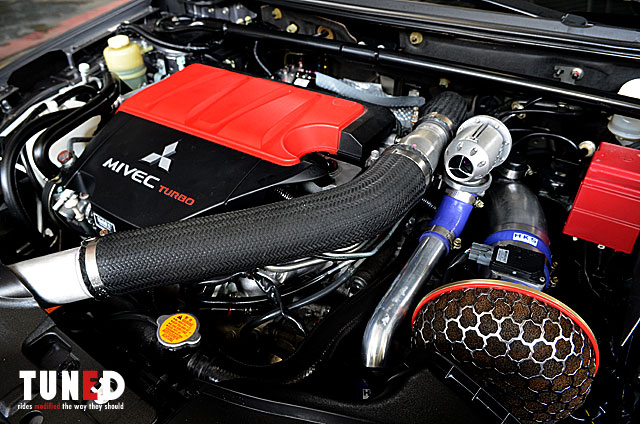 So just how much additional horses did it come up with? Thanks to Tommy Teng of DTM/Autotechnika who did the ECU tweaking on his Dynapack dyno, this EVO-X now pumps out an impressive 344whp (250whp stock baseline) and a gut-pulling 339 ft/lbs of torque. Another advantage to having a stand-alone ECU like this HKS unit is that it allows the tuner to dial-in a whole new set of parameters should additional engine mods are to be done in the future like aftermarket performance cams, injectors, pistons and stuff. 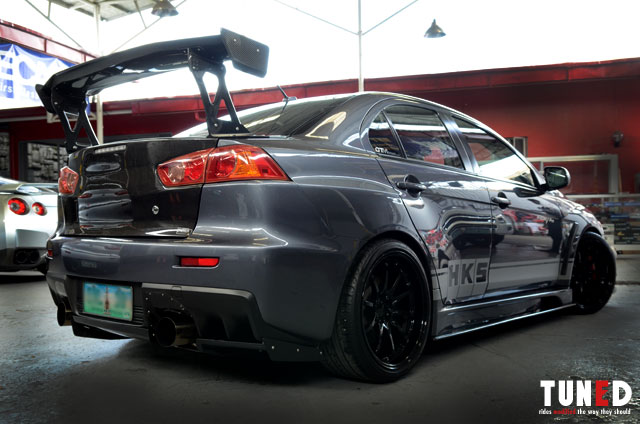 On the outside, its hard not to notice the aggressive looking, time-attack inspired body kit. This is from the popular bespoke body kit maker in Japan called Varis.

To be used for their own time attack EVO-X, Varis developed a special lightweight series of carbon body parts to help not only give a more purposeful look to the exterior but also generate higher levels of front and rear down force. The end result is a multi-piece body kit, which consists of the hood, front fenders, front & rear bumpers and side skirts. Aside from serving its aesthetic purpose, it also enables the car to shed a lot of unwanted weight. Now no tuned car would be complete without bits of carbon fiber and this one has it in the form of canards and the requisite rear wing. The 19-inch black colored CE28 wheels from Volk Racing also lends a lot of character to the overall look and stance of the car. Sticky Yokohama Advan sport tires keep it firmly planted on the road. Footwork is achieved through a set of TEIN Flex coil over with EDFC while Brembo calipers and discs provide stopping power. Combining attainable high horsepower levels with serious tuner aesthetic stuff is quite the norm for today’s tuner car. Thanks to companies like HKS and Varis, EVO owners can get the best Japanese technology straight onto their cars.

View all posts by Francis Pallarco →