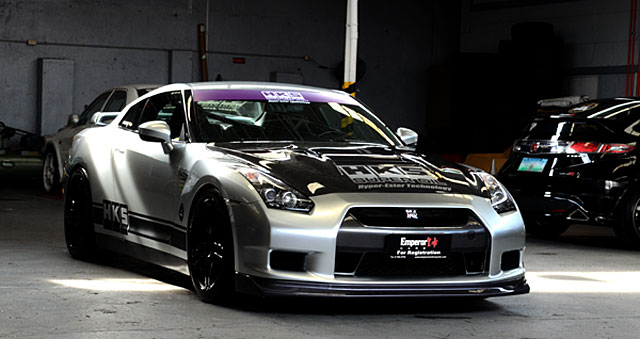 Right off the bat, the current Nissan GT-R makes no pretensions regarding what it can do on the track. In fact it has proven itself to be one of the fastest production cars around any racetrack. This actually comes as no surprise for Nissan engineers loaded it with state of the art technology. With over four hundred plus horses from a twin turbo V-6 engine and a “Nurburgring-tuned” suspension, it’s no slouch. Why they loaded it to the hilt stems from Nissan’s mantra that they should do everything they can to make it extremely fast and handle exceptionally.

Just like previous GT-R models that have been modified by various Japanese high performance tuners, it didn’t take long for the current GT-R to enter the aftermarket-tuning scene. As we all know this is a realm where the possibilities, as they say are endless. As such, we have Dolf Santiago’s tuned GT-R from Emperor Motorsports. His shop needs no intro at all as it specializes in selling hardcore aftermarket performance parts and accessories from Japan. In addition, it also offers periodic maintenance services on high performance cars. But what makes it even greater now is the fact that it’s the authorized dealer of HKS parts and lubricants in the Philippines.

Going back to Dolf’s highly tuned GT-R, occupying the top spot on its list of mods is the HKS GT800 kit. Aside from its very hefty price tag, this advanced turbo kit is not a simple bolt-on kit. For starters, the whole engine must be removed to facilitate the mods. Before advancing to the GT800 kit, it needs the components found on the GT600 kit. It’s really so advanced that HKS does not offer any warranty as to what can happen to the engine. The said kit comes with a comprehensive list of equipment that includes, Special GTII Turbines, Heat Resistant Cast Exhaust Manifolds, GTII (50mm) Wastegates and aluminum piping’s. According to HKS, the GT800 Turbo Kit with “Symmetrical Twin Turbo Layout” combined with other HKS performance products has the potential to increase the R-35’s engine performance to 800+ horsepower”. Local tuning guru Tommy Teng of DTM/Autotechnika was responsible for pulling out the motor while Dolf flew in Lester Wong of HKS Singapore who dialed-in the HKS F-Con V-Pro ECU. Another notable and very audible mod is the HKS Superior R-Spec exhaust system. Being the high-end model of the HKS exhaust systems, it’s made of full titanium and very, very lightweight. Hearing it howl through the titanium tips during high rpm throttle bursts as the GT-R goes through the gears is nothing short of spectacular and addicting.

After more ECU tweaking on the DTM/Autotechnika Dynapack Dyno, Tommy Teng was able to extract over 700 plus horses at the wheel and 600+ lb-ft of torque. Despite not being able to reach the 800+ target, this is just due to the lack of internal mods such as forged pistons and heavy-duty con rods. Overall, this is certainly a considerable figure and feat, given that a stock GT-R is already rated at 480 horses. As compared to the explosive power burst of let’s say a tuned EVO or an STi, Dolf comments that the GT-R’s power delivery is more consistent whether in the low, mid or high rpm levels. While I can truly attest to that, but what really got my attention was the linear and neck-pulling acceleration of this beast that really pushes your back hard on the bucket seat. Despite its hefty weight, the addition of stiffer aftermarket lowering springs from Mine’s limits the amount of body roll together with wide Bridgestone rubber. With a well-designed silhouette, Dolf simply added slight exterior touches. A Zele front lip spoiler and a carbon fiber hood is all that’s needed to assert its performance factor. With all the mods done to it, Dolf’s R-35 certainly lives up to its predecessors in all aspects of tuning.

View all posts by Francis Pallarco →