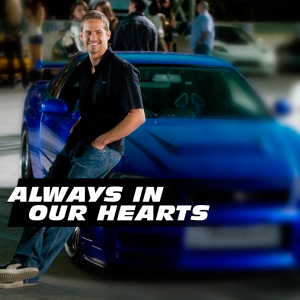 Before I begin, I want to extend my heartfelt thanks to Paul Walker – God rest his soul – not only for portraying characters in films that have been a part of my life (the Fast and the Furious movies, Pleasantville, Varsity Blues), but for his generosity and humanitarian efforts through the organization Reach Out Worldwide, which he founded in 2010. Among the many relief efforts they’ve assisted in was that to help the victims of Typhoon Yolanda/Haiyan in the Philippines.

This was his message, recorded on-set during the filming of Fast & Furious 7:
http://youtu.be/_hTJN2T-Tws
He will sorely be missed, and I am truly saddened by his passing. Rest in peace Brian O’Conner. Rest in peace Paul Walker.

Perhaps his greatest on-screen legacy will be his work in the Fast and Furious franchise. I have always been an unabashed fan of these action flicks and I’ve never been ashamed to say it. I even have the original DVDs to prove it (though I’ll have to find them in the closet somewhere). Those six movies (and counting) may be the most influential car movies of all time.

Many have criticized the films for being unrealistic in their portrayals of the car scene (seriously, where were those babes when we used to hang out in Greenhills or Automall Parkway?) and proper driving technique (who the hell downshifts in the middle of a drag race?). And lets not mention how many holes there are in each and every story and plotline (you mean to tell me a bunch of punk street racers can take on an entire country’s military and win?). To those who subscribe to the above beliefs, I have two things to say to you: 1) you are absolutely correct in your logical assessment of the movies, and 2) you’ve completely missed the point of these incredible movies.

The Fast and Furious franchise, for better or worse, has turned a larger audience on to the car scene. How many of use were impressionable youths who got into the car scene because of The Fast and the Furious? In 2001 I was already a car guy, and I hung out a lot in an area called Automall Parkway (I never raced, though – my stock car wasn’t very fast), where, in my day, illegal street races were held in the San Francisco Bay Area. But when that movie hit, the number of people who not only raced there but just went to watch seemed to double. Now that’s not a scientific measure of anything by any means, but it seems to me that The Fast and the Furious film must have had a large influence on people’s awareness of the automotive aftermarket industry. For many, Spoon became more than just a utensil and to drift was more than just floating around. It gave us some of the most memorable quotes in recent movie history:

Dom/Vin Diesel (FF1): You can have any brew you want… as long as it’s a Corona.

Edwin/Ja Rule (FF1): It’s not how you stand by your car, it’s how you race your car.

Dom/Vin Diesel (FF1): It don’t matter if you win by an inch or a mile. Winning’s winning.

But it goes beyond that. The FF franchise has several recurring themes, central among these are mental toughness, loyalty and family. My personal favorite quotes from the series are these:

Brian/Paul Walker (FF1): But if I win, I take the cash, AND I take the respect.

Han/Sung Kang (FF3): Life’s simple. You make choices and you don’t look back.

Dom/Vin Diesel (FF6): You don’t turn your back on family, even when they do.

Maybe by sheer longevity, the Fast and Furious movies have given the characters life and soul, endearing them to audiences worldwide. When faced with a decision, you know how the characters will react or what they will do, and not just the main characters. Supporting players have depth, too. The personalities of Letty, Roman, Taj, Han, et al are distinct and very well defined (if a little over-the-top). This is another part of the franchise’s success – each character is human, and somehow relatable.

I am looking forward to the next installment of FF, though it will be a bittersweet experience watching it knowing that it will be the last time Brian O’Conner appears as anything more than a flashback sequence.